What is my “Potential” in life?

by: Anthony Smith
It was Dean Karnazes' 30th birthday and he was drunk from a night of partying in a local bar near his home in San Francisco, California. Now, after midnight he was feeling depressed with the direction his life was heading. He was a corporate hack desperately running the rat race. He gathered up his discouragements and slipped out the bar's back door and walked the few blocks to his house. On the back porch, he found an old pair of sneakers. He stripped down to his T-shirt and underwear, laced up the shoes, and started running. He had not run since high school, but it seemed like a good idea at the time. He sobered up in Daly City, about 15 miles south of where he started. It was nearly four in the morning. The air was cool, slightly damp from the fog, and Karnazes was in a residential neighborhood, burping tequila, with no pants on. He felt ridiculous, but it brought a smile to his face. He hadn't had this much fun in a long time. So he decided to keep running. 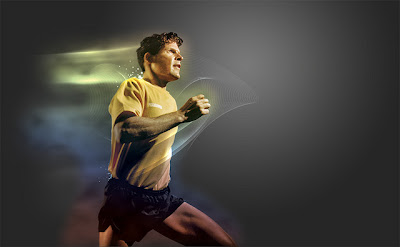 When the sun came up, Karnazes was trotting south along Route 1, heading toward Santa Cruz. He had covered 30 miles. In the process, he'd had a blinding realization: There were untapped reservoirs within him. It was like a religious conversion. He had been born again as a long-distance runner. It had been years since he had challenged himself like this. More than anything else now, he wanted to find out how far he could go. But at that exact moment, what he really needed to do was…stop. He called his wife from a pay phone, and an hour later she found him in the parking lot of a 7-Eleven with bloody feet. Other than having a lot of explaining to do with his wife, Karnazes changed the course of his life (and mine) in that moment.

Dean Karnazes is now a world class ultramarathon (100 miles) runner. He has many accomplishments to his credit. In 2005 he competed in a 350 mile relay race all by himself, and ran the entire distance without stopping. In 2006 at the age of 44 he ran 50 marathons in 50 states in 50 consecutive days. He ran a 135 mile ultramarathon across Death Valley in 120-degree temperature, and a marathon to the South Pole in negative 40-degree temperatures. He was recently ranked by a Time Magazine poll as #27 in the “Top 100 Most Influential People in the World.” It all started with a decision! That decision he made (drunk) to go for a run that night not only changed his life, but he is now influencing others to change theirs. When I read his story back in 2006, I made a decision to fulfill a lifelong dream of running in a marathon, which I did in 2008. All of the sudden my mind was open to new possibilities for myself. I asked myself, “What is my potential?”

Dictionary.com defines “potential” as, “capable of being or becoming.” I am not saying that we all have to be supreme athletes to reach our full potential in life. Maybe you are gifted in medicine and you are being called to go back to school. Maybe you have been blessed financially and you been called to be a giver. Maybe you have a wonderful voice but have never used it or shared it with the world. There is no limit of possibilities for how we can reach our potential. You could hold the key to something great that could change the world for the better! The only thing stopping us from reaching that potential is the decisions that we are making right now. We could strive for and yet never reach that potential, but if we don’t try we will never know.

God has given us everything we need to be able to reach our potential. Jeremiah 29:11 states, “For I know the plans I have for you," declares the LORD, "plans to prosper you and not to harm you, plans to give you hope and a future.” God has a great plan for our life, but it does require our cooperation. Our potential is not limited to what we “think” nor is it limited to earthly understanding. No, our potential comes from the Highest of High…God! Do not be afraid to dream big. So how do we know if a dream we have is actually from God? Joel Osteen once said, “A Godly dream is one that you have let go of, but it has not let go of you.” If you feel it is time for you do something now, I will give you three simple steps to get moving toward the wonderful gifts that await you (and through you).

1. Make a decision
Make up your mind and go! This step can happen in an instant, and when you least expect it. You may be mowing grass and all the sudden say, “I am going to get on a budget and be debt free!” Make these thoughts your goals, and be sure to write them down and organize them. Pay close attention to that quiet inner voice that has been speaking in your ear the past few years. It is there for a reason!

2. Surround yourself with people sharpeners
Some people in your life right now will be dream killers. This is a good time to reexamine your relationships. Surround yourself with people who will help sharpen these dreams and not kill them. Human nature will make others jealous when they see you wanting to do something positive with your life. Sometimes they will try to discourage you, just to keep you from doing it. Stick with those that say, “I am proud of you for this, and let me know how I can help.”

3. Learn discipline and trust
It is time to learn the trade and it will take some work and guts (and glory). It will also take some time to get things going, so be sure to stick to it. This may mean getting an education, or it could mean getting up at 5:30 a.m. to pray regularly. During this time it will be important to “trust” in God and what He is doing in your life. Many times along the way you will feel discouraged and want to throw in the towel. That is normal. Do your part and trust God to fulfill His part! Good luck and God Bless!